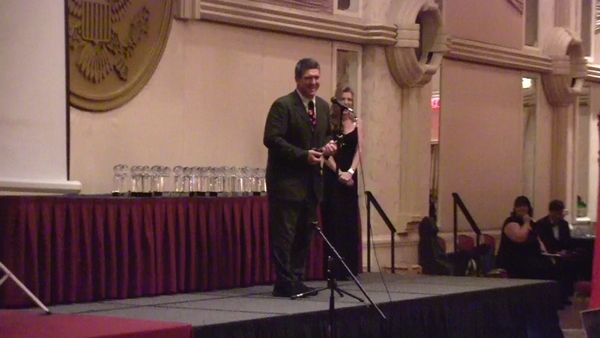 
On Thursday August 23, 2012, Tension: 25 Years Underground screened to a SOLD OUT crowd at the Naval Heritage Center in Washington, DC, for the World Music and Independent Film Festival (WMIFF). It also won Best Feature Film Documentary at the Festival’s award ceremony held at the Capital Hilton on August 25th.

Many of the band members from both Deuce and Tension were present for the screening. The audience cheered watching scenes of Timmy Meadows’ screaming guitar leads. Marty Friedman reminisced in a heartfelt manner about the first band he’d ever played in. Comic relief spilled onto the crowd as Mary Lindsey shared her anecdotes about hosting them in her “Barn” as they groomed their style. The documentary was further enjoyed as Tom Gattis expressed his efforts of pursuing his career in music. The crowd felt sympathy as bassist Mike Francis left the band to stay with his girlfriend, as Tension went on to record their first album without him. Overall, the crowd enjoyed the roller coaster ride of the band’s trials and tribulations through the 80s, their demise in 1988, and reunion this year at the Keep It True Festival in Germany. Producer Rudy Childs was on hand to introduce the film that was a labor of love, and quoted a fan who attended a recent screening:

There are times, later in life perhaps, when we may hear a song, or smell an odor and be instantly transported - for several seconds, to a memory so real that we get lost in it. A mosaic of remembrance can splash our brains with a burst of happiness. Today, at the Albuquerque Film Festival, I was kicked hard in the nuts by the pulse-driven, working-class documentary TENSION. — Jay Callison

At the awards ceremony, the documentary beat out 10 competing films that covered world topics including an artist in Salvador, Brazil; child slave labor to harvest and produce chocolate in the Ivory Coast; legendary Indian classical maestro sitarist Ali Akbar Khan; and an entry about Elvis.

Drummer Billy Giddings and his wife Clarinda were there to witness the magical moment as Tension: 25 Years Underground took the top honor to prove that heavy metal is as relevant as the movie is entertaining.

It’s been quite a summer for the documentary. This is the second time it has won the top honor, the first time in May at the Desert Rocks Film and Music Event in Victorville, California.

Looking forward, the film is an Official Selection at the Portobello Film Festival in London. It will screen in a headlining slot on Saturday September 8th, at the Westbourne Studios, 242 Acklam Road.  It is also in competition at the Las Vegas CineFest held at the Palms Casino Resort on October 3rd- 7th 2012.
March 7, 2012

COMING SOON TO DVD!
January 7, 2012
To all, Happy 2012! We are very much looking forward to the 'Keep It True' festival in April. We have the daunting task of compacting out setlist to 45 minutes long and are having a difficult time deciding on which songs stay and which songs go. For those attending, any special songs you want to hear?
November 3, 2011
We are happy to announce that finally we have the (25th Anniversary Edition) reissue of the TENSION 'Epitaph" CD in stock and will be selling them for $10 each at the "Defenders Of The Old" gig in Baltimore on Nov. 5th.
October 23, 2011
TENSION is sorry to announce that our virtuoso bassist, Tim O'Connor, has had to leave the band due to medical issues with his arm. Tim's presence will surely be missed, not only because of his amazing talent, but also as a band mate in general. We wish Tim the best for a healthy recovery. With that being said, we have brought back into the ranks 4-string monger Michael Francis, who was previously in the band from 1982 – 1985. Please join us in welcoming Michael back into the fold as we prepare to unmercifully bang some heads.
July 21, 2011
We are excited to announce that our 1st reunion show is going to be Saturday, November 5th @ Sonar Club Stage in Baltimore, MD. This will be our first gig since 1988! This will be headlining the "Defenders Of The Old" metal-fest/gig, playing with the awesome metal bands OCTOBER 31, DESTRUCTOR, ZUUL, MIDNIGHT and ACID QUEEN. Official gig flyer, band time slots, advance ticket sales information, etc. coming soon.
April 29, 2011
TENSION announces their first ever gig in Europe at the “Keep It True XV” Festival on the weekend of April 27th & 28th, 2012. The festival takes place at the Tauberfrankenhalle venue in Lauda-Koenigshofen, Germany. Exact day and time of Tension's set TBA. The band can not wait to come play for all of the dedicated die hard metalheads at KIT!!!